A common problem people face is when they widen the gap between their past and present to justify personal or professional stagnation and inertia.

Politicians, actors, business magnates, athletes. It’s impressive when they get to the top of their field, right?

I’ve found that almost everyone I ask this question qualifies these achievements to make them sound more vanilla and ordinary. The highest political office in the country, ownership of multinational companies, winning an Oscar, standing on the Olympic podium, and people shrug as if it’s merely a simple step for people like ‘them’. They can easily fall into the trap of creating a gap between themselves and other people in order to justify their current position. 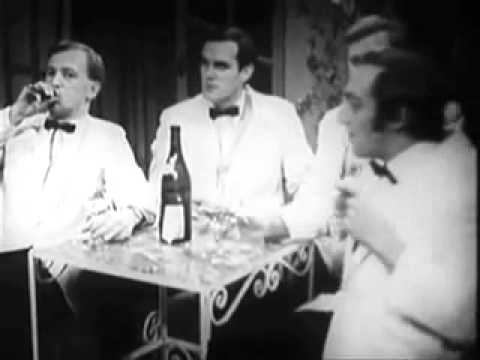 When someone can’t or doesn’t want to improve their standing now, they can instead fall into the habit of lessening their position before. The Monty Python show nailed this idea with a sketch called The Four Yorkshiremen. And it goes like this:

“Who’d’ve thought that forty years ago we’d be sittin’ here drinking Chateau de Chasalass?”
“Aye, we’d have been happy with a cup of tea then”
“Without milk, or sugar”
“Or tea”
“And out of a cracked cup at that”
Then the gap building starts.
“When I was young we ‘ad nothin’. We used to live in a tiny, tumble-down old house with great ‘oles in t’roof”
“House? You were lucky to live in an house, we used to live in one room, twenty-six of us. No furniture, half the floor was missing, and we were all huddled in one corner for fear o’ fallin’”
“Room? You were lucky to have a room. We used to have t’live in the corridor”
“A corridor? Oh we used to dream of living in a corridor, that would have been a palace to us. We used to live in a water tank on t’rubbish tip… [incredulous] an ‘ouse! Hmmpf”

This is the first round. They’ve all established a starting point for their lives a little bit further back down the socio-economic chain than the person who spoke before them. It goes on like this for another two minutes until one person wins the game by stating the impressive lie that he worked every hour of the day down the mines for no money, and every evening was eviscerated by his father with a bread knife.

People inadvertently do this all the time in real life. Which is why the sketch is funny. It mirrors conversations you might have heard or been involved in, and it’s the reason why some people don’t think winning an Olympic medal is that impressive. They just see the career movements of athletes like a hop skip and a jump from local club to national competition to Olympics. A natural progression that was bound to happen because they were born with natural abilities that meant they were predestined to succeed. But we must surely realise that this progression obviously wasn’t without effort or sacrifice? To say otherwise is disingenuous at best. After all, there were people in the same athletics club who never achieved national recognition despite having the same abilities. Do you think Stormzy was the only south-east London rapper with catchy beats and poetry?  Of course not.

My point is that going to the Olympics is impressive, selling out stadiums around the world is an achievement.  No matter whether you consider their gap to be smaller to traverse than yours.

But. The fact remains that it is often more impressive to us if the person has fought adversity to get to the top, and we should laud those people for their achievements.  And this knowledge, and it’s power, is why we need to Mind the Gap.

How do people make their lives sound more impressive if they haven’t made such incredible achievements? Well, they adjust the gap backwards.

People can’t adjust their upper career point (winning gold, being prime minister, becoming a CEO) as easily as they can adjust their starting point (their socio-economic background, what their school was like, where they lived etc.) So some people build a gap whenever they can to make their lives sound more meaningful. For the Four Yorkshiremen their upper point was them sat around a cafe table drinking expensive champagne and smoking cigars. They can’t alter that right at that moment, and they’re all pretty equal. So no-one is more important or inspirational than anyone else.

So they start adjusting how far they’ve come.

As the Four Yorkshiremen sketch shows:

You grew up in a house and now drink champagne? That’s to be expected.

This guy grew up on a rubbish tip, and he’s at this table too. He’s the one that’s the inspirational hero here.

Imagine being able to increase how much people think they have to respect you by doing nothing. All you have to do is push your history back a little bit further (this tactic doesn’t work when talking with people who knew you when you were younger btw), and bingo! Without any effort now you can get the recognition and respect you think you deserve! Don’t believe this happens? Check any internet comment section. At some point someone will start arguing about why they have worked harder than the other guy, or they switch it up and say how they other guy is more privileged than them, so they still win the flame war.

Now, some people have come from terrible backgrounds to succeed, and suffered greatly on their way up, and it’s their prerogative to talk about how this has shaped them. Even to show how amazing it is that they now do whatever they do. When it’s done with honesty and it’s real, it’s powerful and I’ve seen it change perceptions and aspirations.  But I’ve seen it done badly.  In my career I hear a lot about inspirational people doing speaking events for young people, but so much of it is based on gap building that students switch off.

I’ve found that a more productive use of this time is often just to sit people in a room with someone who is in the position they want to achieve. Not showing the distance by spreading the gap back, but instead showing the gap they could build in five years time.

When I saw young people speak to a senior trader at an investment bank they didn’t care what school she went to, nor did they ask her what her home life was like growing up. They asked what GCSEs she got, what A-Levels she did, what she wrote in her UCAS statement, what the hours are like, what the pay is like on the entry level, and whether she likes her job. Young adults don’t care about stretching back their start point, because they’re still living it.

So what does this mean for us?

If your upbringing was one full of support and love, say so. Don’t lie about it to build a gap.  If your school wasn’t really that bad and it got you what you needed, say so. Don’t make it sound like Strangeways with textbooks.

You don’t need to prove anything to anybody else because you’ve got your own path to walk. The benefits of just being honest about your background are pretty special, because people will start talking openly to you and not trying to compete for saddest story.

Since changing our approach to focus on where we are going, our meetups are way more exciting. We all brim with ideas, and we talk about them openly, seeking feedback and guidance. Sometimes these happy chats can go a bit far, especially when the beer is flowing, like when my friends and I sat around and planned a business based on instant noodles. I woke up in the morning with a hangover, a logo and leaflet that I had created, and several emails from local markets who were happy for us to go and set up a stall. We didn’t do that business, but I loved the fact that our conversation was so focused on a silly idea that we nearly registered with Companies House while hammered. This could never happen if we are just seeking solace for the travails of our journey and our present condition.

Just leave it in the past

We don’t need to embellish our past or our stories in order for them to be important, valid or valued.  Own your story, and do something with it.  Try not to use them to justify your self-imposed inertia.

An artist will reflect upon her life, her trials and successes, and she will look forward to what she can create by using them as inspiration. By using it as an inspiration it’s valuable, but using past problems to sanctify inertia is not. ‘Inspirational speakers’ often sanctify their inertia. They’re not moving on, or building something new, they’re just getting paid to bring up all their old nonsense like some drunk in the pub. Experience that leads to inspiration allows us to see the world in a new way, to reflect upon the worth of our very worst experiences. To use the best experiences as a guide for future actions. This is what we need to pass on to the kids – if an experience has no benefit to you or others, then leave it in the past.

Don’t judge people. Or if you have to judge them, base it on what they’re like now – not what they used to be.

This point seems so obvious because it sounds like a cliché. But it isn’t, its a radical way of viewing the world, but it absolutely fucking shouldn’t be. Lots of people declare that no-one can judge them, the old ‘walk a mile in my shoes’ thing, but they never follow their own advice. Give people a break. But if you have to judge people, do it based on what they’re like today, and dont extrapolate that judgement to justify in your mind a negative perception of them tomorrow. Wipe the slate clean each day. Seventy times seven.

The sooner people stop harking back to some imagined past the better. The past can be a source of wisdom, or the opiate of the terminally scared, depending how you use it. I like to take an optimistic view of this – people don’t bring up an imagined and embellished past just to improve their standing, they do it because they are scared that right now they aren’t achieving anything, or worse, that they are being ignored. The bigger their gap to their starting point, the greater their accomplishments are right now.

The problem is when this becomes a brick wall. People stop looking forward and focus all their time looking back. The past is comforting, they can make it look and feel however they want when they tell their stories. The past is comfortable, the future is uncertain and difficult.

There’s a reason that drunk people like to tell stories about other times that they were even drunker – it mitigates the state that they’re currently in, and gives everyone a sense of comfort that nothing bad happened the last time, and nothing bad will happen this time. The past will repeat itself ad infinitum. There’s comfort and reassurance in that things will stay the same, even if it means that they don’t accomplish what they want to.

Don’t widen your gap to the past. Widen your horizons now.

Instead of playing Mind the Gap like the Monty Python sketch, think of a story that you want to tell in five years time. Then go live it.

This site uses Akismet to reduce spam. Learn how your comment data is processed.